Starhawk is an author, activist, permaculture designer, and one of the foremost voices in earth-based spirituality. Her twelve books include The Spiral Dance, The Fifth Sacred Thing, and The Earth Path, and her first picture book for children, The Last Wild Witch. She has lived and worked collectively for thirty years, and her experiences inform her book on group dynamics, The Empowerment Manual: A Guide for Collaborative Groups. Her latest book, City of Refuge, is a sequel to The Fifth Sacred Thing. The second-highest funded fiction project ever on Kickstarter, it became available to the public in early 2016. Starhawk directs and teaches Earth Activist Training which combines permaculture design certificate courses with a grounding in spirit and a focus on organizing and activism. She has been recognized by the Permaculture Institute of North America as a leading figure in the permaculture field and has been awarded PINA’s dual diplomas for excellence in education and permaculture site design. Starhawk’s books have been translated into many languages, while her essays are reprinted across the world, and have been included in numerous anthologies. Her writing is influential and has been quoted by many hundreds of other authors, from magazines to trade and academic press. Her books are often used in college curriculums. Starhawk is a gifted teacher and speaker with an international audience. She is a veteran of progressive movements, from anti-war to anti-nukes, and is deeply committed to bringing the techniques and creative power of spirituality to political activism. Her work in progressive movements spans over 30 years. (Enjoy this 2013 presentation: “Permaculture and the Sacred: A Conversation with Starhawk” from Harvard Divinity School.) She has organized, trained protesters, and been on the front lines of antinuclear actions at Diablo Canyon, Livermore Weapons Lab, Vandenberg Air Force Base, and the Nevada Test Site, among others. She traveled to Nicaragua with Witness for Peace in 1984 and made two trips to El Salvador to give ongoing support for sustainability programs. She continues to be a witness for peace on the front lines of the Palestine/Israel war, working with Palestinian and Israeli peace activists. A main focus for the last several years has been the global justice movement; Starhawk has taken part in many of the major actions, including those in Seattle, Washington DC, Quebec City, Genoa, New York City, Cancun, Mexico, and Miami. She co-founded RANT: Root Activists’ Network of Trainers, and teaches non-violent direct action training for groups throughout the US, Canada, Mexico, Europe, Palestine, and South America. She is active in the revived American peace movement, and works with Code Pink. Starhawk also works on countless environmental and land use issues, and is a founder and active member of the Cazadero Hills Land Use Council in western Sonoma County. Starhawk is perhaps best known as an articulate voice in the revival of earth-based spirituality and Goddess religion. Besides her inspiring, much-read books, she is a co-founder of Reclaiming, an activist branch of modern Pagan religion, and continues to work closely with the Reclaiming community (www.reclaiming.org). She consulted on and contributed to a trio of popular films, the Women’s Spirituality series (directed by Donna Read). Starhawk and Donna Read formed their own film company, Belili Productions. Their first release was Signs Out of Time (2004), a documentary on the life of archaeologist Marija Gimbutas, the scholar who made major discoveries about the Goddess cultures of Old Europe (www.belili.org). Starhawk and Donna’s second documentary, Permaculture: The Growing Edge, came out in 2010. Starhawk has also made several short documentaries which can be found on YouTube: “The Spiral Dance Ritual,” “Reclaiming’s Spiral Dance: Three Decades of Magic,” “Permaculture in the City,” and “Permaculture Principles at Work.” Starhawk travels internationally teaching magic, the tools of ritual, and the skills of activism. She lives part-time San Francisco, in a collective house with her partner and friends, and part-time in a little hut in the woods in Cazadero, California, where she practices permaculture in her extensive gardens, and writes. Her website is http://starhawk.org/. In Earth Activist Training, which she and Penny Livingston-Stark developed and which she now teaches with Charles Williams, Pandora Thomas and others, many strands of her life work are braided together. This is the best opportunity for those who wish to do extended work with Starhawk. Starhawk will teach at all the EAT courses. Click here to view  Starhawk’s Books and Novels under the Writing link. 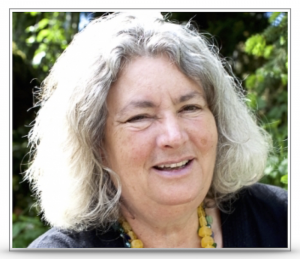