In times of shifts in society and ecological questions above all we dedicate ourselves to humaneness and to the responsibility for the world. Through our life and activities we express our connection with the Earth and its earthlings. Therefor many different paths are treaded, because the different pressing questions of today need different answers that are adjusted to people and conditions. In addition to a stewardship of available resources we align ourselves to a forward-looking mutual caretaking in life and economy. In this diversity the community reflects like a societal microcosm the basic issues of the world.

Respect of diversity and development of a community vision

Sieben Linden defines itself as a social and ecological community aiming at developing cooperation between nature and human beings. A document presenting the objectives and strategies of the ecovillage has been written by the community: it can be found here in German or here translated . The guidances presented in this document do not constraint the future of the community and are meant to evolve: thus, the community is involved in an open process where new social and ecological experiments are received positively. This absence of constraints is sometimes perceived as a lack of unity in the community: the ecovillage members are proud of these differences and present themselves as “unity in diversity”.

With the growing number of community inhabitants, the decision making through a systematic and general approval of all members was too time-consuming and was abandoned in 2008. A new process, based on the creation of several competent circles, was then implemented: the circles are responsible for taking the decisions they are in charge of and the community put its trust in the circles’ members to realize their activities. Six different circles are currently in function and elected every year: the housing cooperative WoGe, the land cooperative SiGe, Building management, the Freundeskreis Ökodorf eV, the Food Provision and the New Comers council. All decisions in the different circles are taken by consensus.

The most important decisions (for example, discussions about the number of new members that can be welcome in the community or the approval of important expenses) are still taken during the monthly general assemblies, where all community members are invited. A four-choice consensus method is now used in all general assemblies. This method has been developed by the community as many people were remaining silent despite not being in agreement with a decision: these members indeed chose not to express their opinion as they did not want to slow or even block the decision making-process. This new method seems to be a useful tool so that people can express their doubts on a proposal, without blocking it. Thus, all Sieben Linden’s members have four options to give their opinion about a proposal: For a proposal to be passed, 2/3 of all the expressed votes should be “Yes” and no one block the decision with a veto. When no veto is expressed but less than 2/3 of all the expressed votes are “Yes”, the proposal is momentarily put-aside and will be brought again, with eventually some changes. In case of veto, the proposal is put on hold for 4 weeks: the person who blocks the proposal should then organize a meeting with the people that wanted the proposal to find a new proposal that meets the needs of these people and the person who doesn’t want it.

Use of communication skills, conflict facilitation 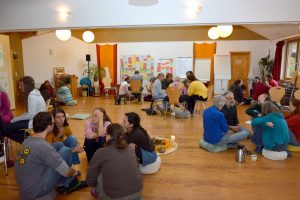 The Forum is a communication tool for groups which has been developed by the German ecovillage Zegg. During a Forum session, which lasts 90 minutes in its standard form, the group sits in a circle and the center space is used as a stage where everybody can bring any thought or feeling to others: one by one, the successive presenters enter the middle of the circle and starts sharing with the group. Two facilitators normally guide the session and help the presenter to deepen the sharings and in this way intensify the group’s experience. When a presenter has finished, he returns to his seat within the circle and some of the other participants can enter the middle of the circle and give their feedback about what they have perceied. This step is called “mirror” as all the perceptions are only brought individually by the participants and are not collectively discussed by the group. It gives the presenter the opportunity to learn how others see him / her and enables the group to give some insight on a specific topic. For others, it is also a way to broaden a specific topic brought by a community member. It creates an empathic and trustful environment which enables the participants to bring authentic sharings. 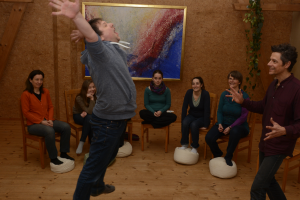