Our goal is to live a life that everybody on earth can live without harming the earth. Our ecological footprint should be just “one earth”. Unfortunately, we are not there yet.

From the very beginning of the project in 1997, a design of the ecovillage was established. With the help of an urbanist and a permaculture designer, the site has been observed for 1 year and key elements of the area have been identified: the fauna and flora has been analysed, the sun and wind resources have been assessed, the soil has been studied… Based on these observations and on permaculture approach and ecological principles, a local master plan has been created and divided the whole area into different several small areas with different purposes.
Currently, the community development is not based anymore on a master plan but the location of new buildings is decided upon following several criteria, which guarantees the good integration of buildings in the existing environment.

Protection of cycles of water

Until 2013, the community was supplying its water directly from 2 wells that have been dug in the ecovillage at a depth of 45m, but in 2014 the ecovillage was connected to the municipal water supply, without having the possibility to refuse this decision. All domestic water is then provided from the municipality while the irrigation of gardens, which represents half of the total water consumption is still done with water pumped from the wells.

The household use of drinking water is around 60 litres per person and per day, about half of the mean consumption of drinking water in Germany. In order to reduce their water consumption, several measures have been implemented in Sieben Linden.
First, all toilets in the community are composting toilets, in which urine and faeces are separated. In addition to the limitation of water consumption, the pollution of wastewaters is strongly reduced thanks to the use of composting toilets, which enables to limit the area covered by the wastewater treatment plant. Moreover, it enables to reduce the size of the ducts used in the sewage system.

After being separated from urine, faeces are composted in separated facilities, before being used for tree planting. Urine is evacuated with the wastewaters to the water treatment plant which contains 2 main basins. The wastewater first flows into a decomposition tank containing straw: the solid matter and straw mix and rot anaerobically. The wastewater cleaned from the solid matter is then transferred with a pump to a reed bed where bacteria digest all dissolved substances. The purified water flows into the control tank where it can be pumped to water the gardens. All surplus is evacuated in the woodlands.

Use of energy from renewable sources

When speaking about energy production, it is mainly for electricity and heat production.

Many different solutions enable to reduce the heat needs in Sieben Linden:

During the winter months, when the sun is not sufficient anymore to warm the houses and produce hot water, firewood collected from the Sieben Liden’s forest is used (around 2,7 m³ pine wood per person and per year): the wood is burnt in boilers, in combination with solar panels and hot water tanks.
It is important to note that the heating needs are very different in the ecovillage and depends on the type of housing and its insulation: trailers are very poorly insulated and need important of quantities of firewood. Conversely, all houses are much better insulated and need less firewood for their heating: for example, the house called Sonnenhaus Libelle, built in 2011, reduced the firewood consumption to 0,6m³ per person and per year by using a very efficient insulation, triple glazing windows and more solar panels (with 6m² per inhabitant).

Several projects to reduce the energy consumption or increase the local electricity production are being studied: a wind turbine may be installed to supply electricity and would be complementary with PV-panels. Electricity storage could also be considered.

The community vision in terms of food production is to develop a conscious consuming: the idea is thus to increase awareness of the impact of purchasing decisions on the environment and society in general. It is partly based on self-sufficiency on various products.
Several agricultural activities are held in Sieben Linden in that sense, with cultivation of around 2,5 hectares of gardens to provide the community with vegetables, fruits and aromatics.
A community garden has been created for local production: around 1 hectare (the area will be extended in the next months) are cultivated to provide vegetables for the community and guests. 4 employees and several volunteers work all year in the garden, they are regularly helped by other community members and volunteers when needed.
3 greenhouses (with an area of around 350m²) enable the production of vegetables which need hot temperatures during the summer: tomatoes, cucumbers, squashes, peppers and eggplants and the production of seedlings.
In total, around 50 different plants are cultivated every year in the community garden, using ecological methods and trying to reduce the use of tractors.

For the last 20 years, an independent gardener named Uga cultivates a 1-hectare garden rented to the community: the majority of fruits and aromatics consumed by the community come from Uga’s garden. Other vegetables such as corn, zucchini, leeks are cultivated in this garden.
Uga has also created a tree nursery and produces many different fruit trees sold in all the region.

Several other community members rent a parcel and cultivate their own vegetables, to develop community self-sufficiency. In total, around 75% of the community needs in vegetables, fruits and aromatics are covered locally in the ecovillage.

All community members currently live in 11 residential buildings and around 45 trailers which have been renovated and converted into well-insulated living places.
From the first years of the ecovillage, green building has always been a priority for the community: the first 2 buildings, which were already built when the land was bought, have been renovated and extended using natural and sustainable materials.

As straw-building was not recognized as “common technology” in Germany, the community members have had to carry out an important pioneering work so as to legitimize and improve understanding of straw-bale constructions.
Thus, the “Villa Strohbunt”, built from 2001 to 2004, was the first straw-bale construction in Germany to get a building permit: it has been integrally built by hand, from local and recycled materials.
In 2004, the 3-floors straw-bale house «Strohpolis» was the highest residential straw-bale house in Europe and enabled the official validation that straw-bale could be used as a building technique in Germany.

The house presented in the next picture was built in 2008, by using timber-frame construction and straw bale insulation. This is the first attempt at building a house using prefabricated straw bale walls prepared in a close indoor workshop: the panels were then mounted with a crane, which made the building site less dependent on the weather.

Sustainable building is of course not reduced to straw-bale technique: thus, a common rule in Sieben Linden is that the living area should be limited to 33m² per inhabitant. Moreover, several building materials are excluded in Sieben Linden’s buildings as they are not ecological: mineral wool, PVC, polyurethane foam…
Although they are well-isolated, the trailers are not as efficient as the straw-bale houses in terms of isolation and need much more heating. The trailers are then considered as a temporary solution to host people before the building of more ecological housing buildings (the community aims at building around 1 new building per year).

Protection of biodiversity and regeneration ecosystems

Sieben Linden’s community is particularly aware of the global biodiversity loss and is deeply committed in its protection.
Locally, it starts with a limitation of land artificialisation: the buildings are constructed on limited areas, so that they can fulfil their objectives without compromising the surrounding natural environment. For example, for every residential building, the building area per inhabitants is limited in order to reduce the building size: the residential area should then not exceed 33 m² per inhabitant.
Sharing some services between inhabitants is also a particularly good way to reduce the building areas. For example, common laundries are used in Sieben Linden: by sharing the same washing machines, you can then reduce the construction costs of the buildings (as you do not need to include one laundry in every apartment), buy more expensive and effective washing machines and increase the use of the devices.

Sieben Linden is also particularly aware of the impact of land management on the biodiversity, whether it is in building, agricultural or forest areas.

In the building area, many different gardens and open areas have been created, which helps to develop an important biodiversity, especially for birds.
A large pond has also been created in the ecovillage: although its first objective is to be used as a fire protection pond in case of fire, it is also very useful for the inhabitants to have a bath and is also an habitat for many different species of insects and amphibians.

The 20 hectares arable fields are currently not used by the community, they are rented to a local farmer which cultivates them ecologically. An agroforestry project has been started on these fields, which consists in the planting of hedges of trees and shrubs among crops.

The forest management is also an important activity for the community as 64 hectares of forest are under Sieben Linden’s responsibility. Natural and sustainable forestry techniques are used to provide the village with sufficient firewood for heat production during winter: workhorses are preferred to tractors to reduce soil compacting. A few trees are also selected to be used as construction materials in the community buildings, which enables a long-term removal of CO2. Fallen trees are often left so that they can naturally degrade, providing the right environment for specific fauna and flora.
The forest was previously mainly planted and constituted with endless lines of pines. The community coordinates the use of the existing trees and the replanting of new trees, for next generations. The replanted forest is a mix of deciduous trees, to enable a better biodiversity in the forest, which bring very nice contrasts in the forest.

Sieben Linden’s community intends to limit its ecological footprint in terms of transportation, which is the largest share in the global footprint of the community.
The first mean to fulfil this objective is to propose as many services and activities as possible in the community: a majority of the goods needed in the community are proposed locally, in the shop for example, and many activities are organised on site and proposed to the ecovillagers.
When travels cannot be avoided, transportation with buses and trains are encouraged: all guests are incited to use public transportation when travelling to and from Sieben Linden.
A car club has also been created and 10 cars are shared between community members. Electric bikes can also be borrowed.

Analyses of the ecovillage’s ecological footprint have been performed in order to measure the human impact of the ecovillage on the environment. In practice, ecological footprint expresses the area needed to support people’s life over a one-year time span. This footprint can be expressed in a normalized measure of land area called global hectares (gha) or in number of Earths needed to sustain the world population at that level of consumption.
For example, in Germany, the ecological footprint in 2016 (last data available at the moment) was 4.84 gha per capita. It corresponds to 2.97 Earths: thus, if all humanity were living the German way, we would need 2.97 planets to sustain what humanity demands from nature. Globally, humanity’s ecological footprint in 2016 was 1.7 planet Earths, which illustrates that humanity runs an ecological deficit (humanity uses more resources and generates more waste than the ecosystem can handle). 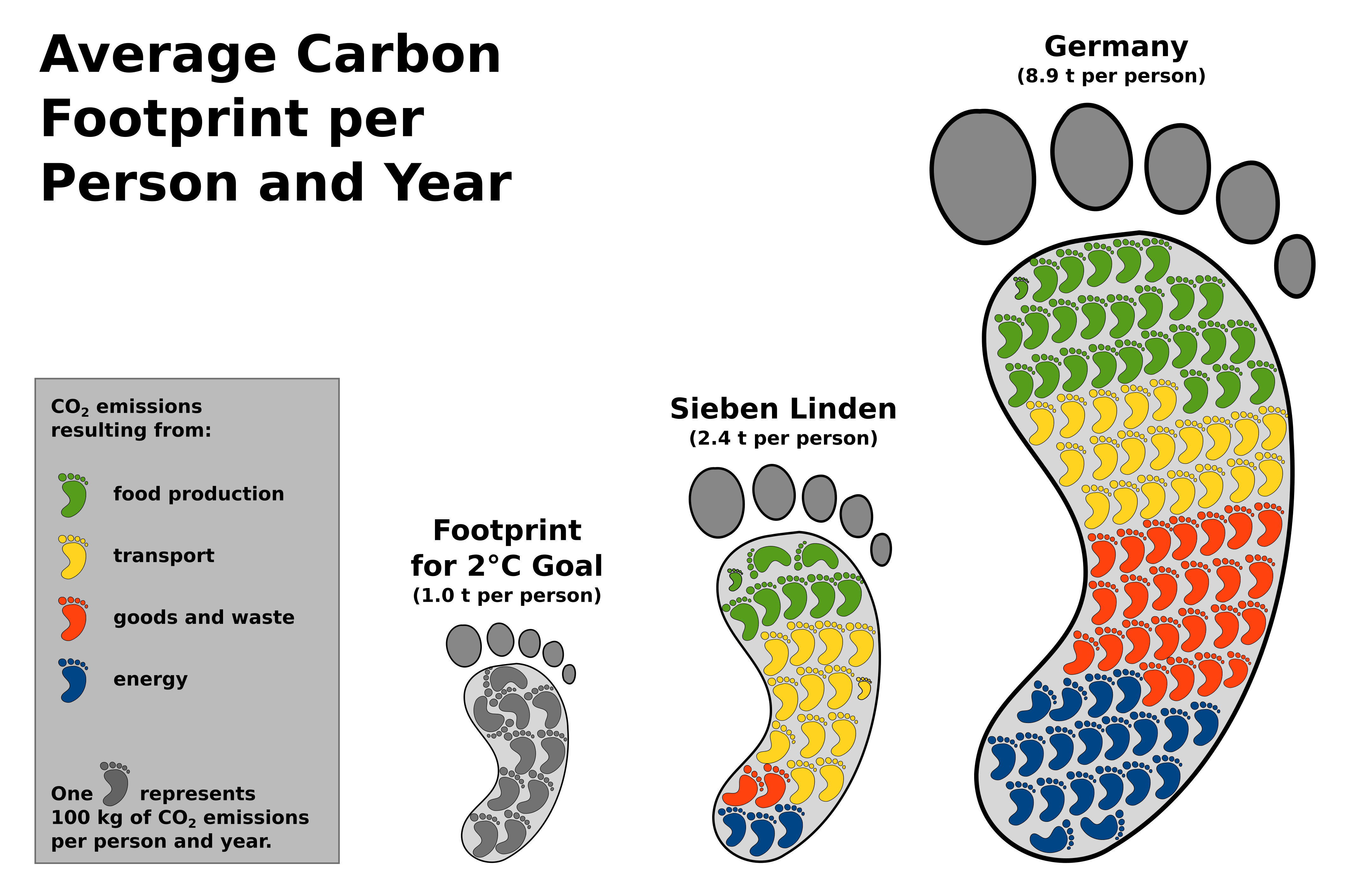 Two different studies have been done to assess the ecovillage’s ecological footprint: the most recent one has been performed by the University of Turin in 2014. It shows that the overall ecological footprint of Sieben Linden is 56% of the German average.
Several conclusions can be made based on this study: