The Sieben Linden project started in 1989 when several people came together to discuss the idea of a self-sufficient, ecological village. In 1993, they bought a project centre in a village called Groß Chüden.

In 1997, the group bought the actual site of Sieben Linden and part of the people living in Groß Chüden moved to Sieben Linden few months later. The existing old farm has first been renovated following ecological methods and converted to the community building, then becoming the main place of community life and seminar centre. 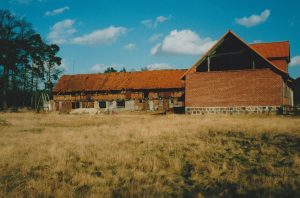 The ecovillage site has grown to more than 100 hectares, including:

The community has now around 150 inhabitants and aims at reaching 300 inhabitants: there is no rush for them to reach that population, the most important is to enable a progressive and organic growth of the community.
The ecovillage is situated in the federal state of Saxony-Anhalt: this state, which was part of East Germany, has experienced a continuous reduction of its population since German reunification. Sieben Linden, which conversely attracts more and more people, arouses the interest of the politicians who deal with the demographic challenge.

Contact with the region has also intensified over the years. The visits and continuous reporting in local newspapers regularly invite the neighbors to Sieben Linden. Sieben Linden is a well integrated part of the municipality of Beetzendorf. A project member is there in the municipality council.

Support the ecovillage with